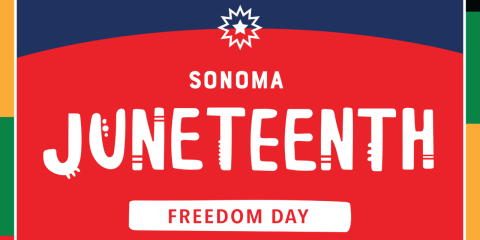 Juneteenth is the oldest known celebration commemorating the ending of slavery in the United States.  Dating back to 1865, it was on June 19th that the Union soldiers, led by Major General Gordon Granger, landed at Galveston, Texas with news that the war had ended and that the enslaved were now free. This was two and a half years after President Lincoln’s Emancipation Proclamation - which had become official January 1, 1863. The Emancipation Proclamation had little impact on the Texans due to the minimal number of Union troops to enforce the new Executive Order. However, with the surrender of General Lee in April of 1865, and the arrival of General Granger’s regiment, the forces were finally strong enough to influence and overcome the resistance. (https://www.sonomacountyjuneteenth.com/)

Central Santa Rosa Library will be tabling an event for the 52nd annual MLK/Juneteenth Community Festival on Saturday, June 18, 2022 from 10 am to 6 pm at Martin Luther King Jr. Park at 1671 Hendley St. The library will be providing library card sign ups and have a small collection of books available for both check out and as giveaways. We will have flyers and pamphlets available that showcase the plethora of resources that Sonoma County Library has available, as well as giveaways for children, teens and adults. We will also be using SonomaFi Connect to provide free wi-fi to at least 50 individuals during the festival.

– FREE and open to the public