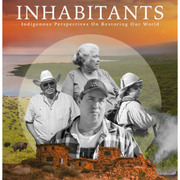 Adult , Teens (Grades 7-12) , Senior
Registration for this event is no longer open.

Watch the documentary film INHABITANTS between November 1-November 15 with special viewing access, then meet the film makers for a panel discussion on November 15 at 6pm.

INHABITANTS: INDIGENOUS PERSPECTIVES ON RESTORING OUR WORLD follows five Native American communities as they restore their traditional land management practices in the face of a changing climate. For millennia Native Americans successfully stewarded and shaped their landscapes, but centuries of colonization have disrupted their ability to maintain these processes. From deserts, coastlines, forests, mountains, and prairies, Native communities across the US are restoring their ancient relationships with the land. The five stories include sustaining traditions of Hopi dryland farming in Arizona; restoring buffalo to the Blackfeet reservation in Montana; maintaining sustainable forestry on the Menominee reservation in Wisconsin; reviving native food forests in Hawaii; and returning prescribed fire to the landscape by the Karuk Tribe of California. As the climate crisis escalates, these time-tested practices of North America's original inhabitants are becoming increasingly essential in a rapidly changing world.

Ben-Alex Dupris is an enrolled member of the Colville Confederated Tribes, where he grew up. Over the years he has worked in commercial entertainment, tribal language preservation, youth media training, and most recently, documenting front-line environmental activism. His is currently a 2018 Concordia Studios Artist-In-Residence, headed by Academy-Award winner Davis Guggenheim. He is also newly awarded a prestigious 2018 Firelight Impact Producer's Fellow, 2017 Sundance Institute "Rauschenburg" Producer's Fellow, and a 2016 Redford Center Grantee for the project formerly named Oceti Sakowin.

Dr. Michael Kotutwa Johnson of the Hopi Tribe, is a PhD in Natural Resources and traditional Hopi dryland farmer – a practice of his people for over two millennia. His work includes lecturing about dryland farming and breaking down barriers for indigenous farmers working with the Natural Resource Conservation Service (NRCS) of the United States Department of Agriculture (USDA).