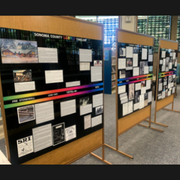 All Ages
Please note you are looking at an event that has already happened.

Curated by two local LGBTQI historians, Tina Dungan & Shad Reinstein, the Sonoma County LGBTQI Timeline will be displayed at the Guerneville Regional Library in November from 11/12-12/3.

Sonoma County has had an LGBTQI presence for many decades. We have had a significant role in LGBTQI culture and politics regionally, statewide, and nationally. Women's studies classes at the SRJC and SSU were two of the first programs in California. Gay men from around the US flocked to the Russian River for vacations in the 1970s and 1980s. Sonoma County helped stop a national anti-LGBT movement by successfully fighting against the Brigg's Initiative in 1978. The Sonoma County LGBTQI Timeline contains 6 panels that describe our history from the late 1960s to 2000. See how your life is reflected in the LGBTQI history of Sonoma County. Presented in partnership with LGBTQI+ LEGACY Sonoma County.

Tina Dungan is a lifelong resident of Sonoma County who came out as a Lesbian in the early 1970s while a student in the first Women’s Studies Program at SSU.  Since 2007, she has been working with others through Lesbian Archives of Sonoma County to capture the cultural and political history of that community. Ms. Dungan also teaches a class based on the Timeline through the Older Adults Program at SRJC.

Shad Reinstein came out shortly after Stonewall and has been involved in local and national LGBTQI culture and politics.  She has been researching Lesbian history for several decades.  She co-produced the documentary film, Mom’s Apple Pie, the History of the Lesbian Mothers’ Custody Movement. She is now researching a lesbian community from the 1930s.  Her work with Tina on the timeline has helped her understand the history and culture of Sonoma County, her new home.

Tina and Shad collaborated to create the Sonoma County LGBTQI Timeline which premiered at PRIDE 2018. As they research the LGBTQI history of Sonoma County, the timeline continues to expand.