Belonging: Stories of Asian and Pacific Islander Immigrants in California: Film and Discussion 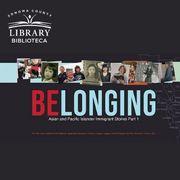 Join a screening and discussion of the film “Belonging.”  After the short film, there will be a discussion with the filmmaker, Lina Hoshino, and the people in the movie, including Jean Chan, Sachiko Knapman, and Youngmi Jung.

Youngmi Jung came from Korea and is a Methodist minister in the United States. Inspired by the Black Lives Matter Movement, she speaks up against racism. Sachiko Knappman moved to the US from Japan as a young bride but soon lost her husband to cancer and had to navigate her life in a new country alone with a newborn child. Jean Bee Chan immigrated to the United States, escaping the turmoil in Southern China, and continues to honor her younger brother, Datman, who died as a child while China was under Japanese occupation.

Often, the AAPI population in America is referred to and thought of as a monolithic community. As AAPI people can attest, nothing is further from the truth. There are over 2,000 languages with multiple ethnicities and cultures under the AAPI heading, and no one narrative can cover all of the AAPI community.

This film series lifts the voices of AAPI immigrants living in California and captures the rich diversity among AAPI communities, one person's story at a time.

This film was funded by the Japanese American Citizens League (JACL) Legacy Fund Grant and the Sonoma County JACL.

Space is limited. Reserve your seat at https://tinyurl.com/3r2zewpx.